A number of lists and strategies have been created that identify plants of particular concern or plants that have been through an assessment process. These lists are reviewed by expert panels and committees and can inform us of particular types of management practices for particular species, and some are part of legislation to help ensure their control or prevent trade.

This information on this page has been reviewed by the weeds working group of the Environment and Invasives Committee (EIC) and is correct as of November 2020.

The Australian Weeds Strategy (2017-2027) provides a national framework for addressing weed issues whilst maintaining the profitability and sustainability of Australia’s primary industries and the reducing the impact of weeds on the environment.

This strategy is overseen by the inter-jurisdictional Environment and Invasives Committee and its weeds working group.

A number of jurisdictions also have specific Biosecurity or Invasive Species strategies:

Thirty two Weeds of National Significance (WoNS) have been identified by Australian governments based on their invasiveness, potential for spread and environmental, social and economic impacts.

Note that some of  the 32 WoNS are grouped together together as one (e.g. Asparagus weeds, Brooms, Opuntioid cacti, and Bitou bush / Boneseed).

Many of these WONS have their own management manuals and guides. More detailed information about these WONS and their Manuals can be found via our Weeds Profile section.

The Environment and Invasives Committee’s Weeds Working Group commissioned a report in 2020 to analyse the WoNS initiative and draft a framework to underpin the future of national established weed management.

The report ‘National Established Weed Priorities – Towards a National Framework’ proposes a draft framework for the nationally coordinated management of established weeds (the draft framework) at section 2.

The draft framework retains the essence of the original WoNS initiative (through the WoNS component), but also moves beyond the single species approach to encompass other national established weed priorities including Weed Issues of National Significance (WINS) and a National Established Weeds Action List (NEWAL). This broadens the scope of the original initiative, addressing landscape-scale management issues for established weeds (WINS), and offering continued management of discrete national priority actions where required (NEWAL).

For more information on the workshops or framework contact pestanimal&weeds@agriculture.gov.au.

A final draft of the framework will be made available on this website for public comment, before being provided to the Environment and Invasives Committee for endorsement and implementation.

Successful biological control is one of the most effective ways to control weeds across the landscape in the long term. Over many years governments have worked together to determine weeds which are suitable for biological control, this currently being through the Environment and Invasives Committee. It is important to determine whether there is any significant use of a weed (as a cultivated or wild plant) that would likely preclude biological control being used against it, before investing in a lengthy and comprehensive research in biological control agents.

There are additional weeds for which biological control programs occurred, which pre-existed the approval processes that have occurred since 1983. This list is included below.

The first biological control approved listing was implemented by the Australian Weeds Committee. The current 2019 Environment and Invasives Committee procedure can be downloaded in PDF format – EIC PROCEDURE FOR ENDORSING CANDIDATE WEEDS FOR BIOLOGICAL CONTROL

There are lists that identify what plant species are permitted entry into Australia. This list can found via this Australian Government website.

The Priority List focuses on exotic pests, weeds and diseases that are not established in Australia and that pose the highest risk to our environment and public spaces. This list will be used to enable activities that help prevent the entry, establishment and spread of exotic pests and diseases.

The National Environmental Alert List (the Alert List) for environmental weeds was developed in 2001. It identified 28 weed species that were in the early stages of establishment and had the potential to become a significant threat to biodiversity if they were not managed: 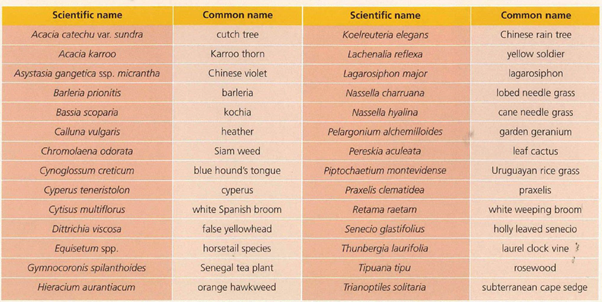 Species were identified for the Alert List based on three criteria:

Whilst this list is no longer in formal use by governments, the species still represent serious weed risks and control activities continue to be undertaken for certain species in some parts of Australia. Refer to the Weed Profiles for specific species information.

Sleeper weeds is a term used for plants that appear benign for many years, but which may suddenly spread rapidly following certain natural events such as flood, fire, drought, climate change, or change in land or water management. Sleeper weeds are not always recognised as a significant problem, even though the potential threat they pose to industry, people or the environment may be extreme.

In 2006 the Bureau of Rural Science (now Australian Bureau of Agricultural and Resource Economics and Sciences) identified 17 potential agricultural sleeper weeds as priorities for eradication. These were:

Limnocharis, miconia and mikania vine are all considered serious weeds in other countries, while Miconia nervosa and Miconia racemosa have exhibited invasive characteristics in North Queensland.

The program is managed by Biosecurity Queensland, a business unit of the Queensland Department of Agriculture and Fisheries. Funding for the program is shared nationally with contributions from the Australian, Queensland, New South Wales, Northern Territory and Western Australian governments.

The RWWNEP program is managed by Biosecurity Queensland, a business unit of the Department of Agriculture and Fisheries and jointly funded/supported by the Federal Government as well as state government agencies in Queensland, New South Wales and the Northern Territory plus Grain Industry Peak Bodies, Meat and Livestock Association and Canegrowers.

Hawkweeds, Hieracium species, are also the subject of eradication programs in NSW, Victoria and Tasmania.

We will be providing a list of species here imminently, as it is currently being updated.

Did you know there is an Australian Weeds Strategy?

The Australian Weeds Strategy (2017-2027) provides a national framework for addressing weed issues whilst maintaining the profitability and sustainability of Australia’s primary industries and the reducing the impact of weeds on the environment.